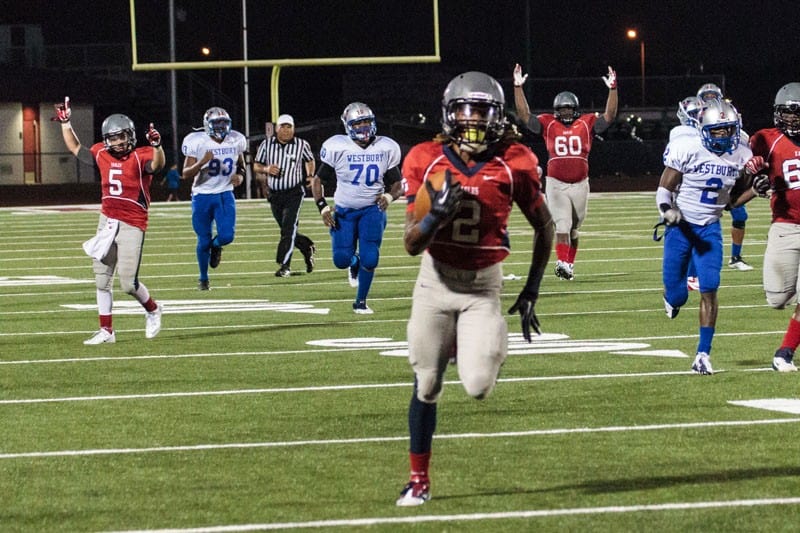 The game plan to was pretty simple. Just hand the ball off to Brett Winnegan and watch him run. And did he run! The junior scat back used his speed and quick moves to gain 211 rushing yards on 19 carries for five touchdowns as the Dawson Eagles completely dominated both sides of the line of scrimmage for a 49-13
non-district win to improve to 2-0 on the season.

Dawson scored in several different ways besides what Winnegan did on the field. The Eagles scored first on a 9-yard run by Winnegan with 6:20 left in the opening period for a 6-0 lead after the PAT missed the
mark. But Dawson quickly got two points when Richard Smith got a safety for the Eagles for an 8-0 advantage with 5:14 left in the first. Dawson closed out the first quarter scoring when Winnegan scored
on a 1-yard run with :07 seconds were left in the first making the score 15-0.

After Dawson forced Westbury to punt on their next possession, Winnegan got loose on a 40-yard scoring jaunt to make the score 22-0 at the 8:15 mark of the second period.

Westbury had no answer for Winnegan as he got loose again on Dawson’s next possession for a 45-yard scoring run. Tyler Day booted the PAT giving the Eagles a 28-0 lead after the PAT missed the mark
again.

But Winnegan was finished as the Eagles put one more score before the half as Winnegan scored his fifth touchdown before intermission on a 6-yard scamper to make the score 35-0.

The Eagles scored two more times in the second half as Zack Burries blocked a Westbury punt in the end zone with 3:03 left in the third for a 42-0 lead.

The final score for Dawson came with 7:21 left in the final quarter when Eric England picked off a Westbury pass and returned it 90-yards for a touchdown and a 49-13 lead.

Senior QB Ross Wicklund was 4-of-13 passing for 63 yards and one INT. Jhordan Mattox-Williams had two catches for 47 yards.

The Eagles run up 359 total yards while Westbury was held to 149 yards.

Dawson will face Clear Falls on Saturday, September 21 at CCISD Stadium at 6:00 p.m. in League City.